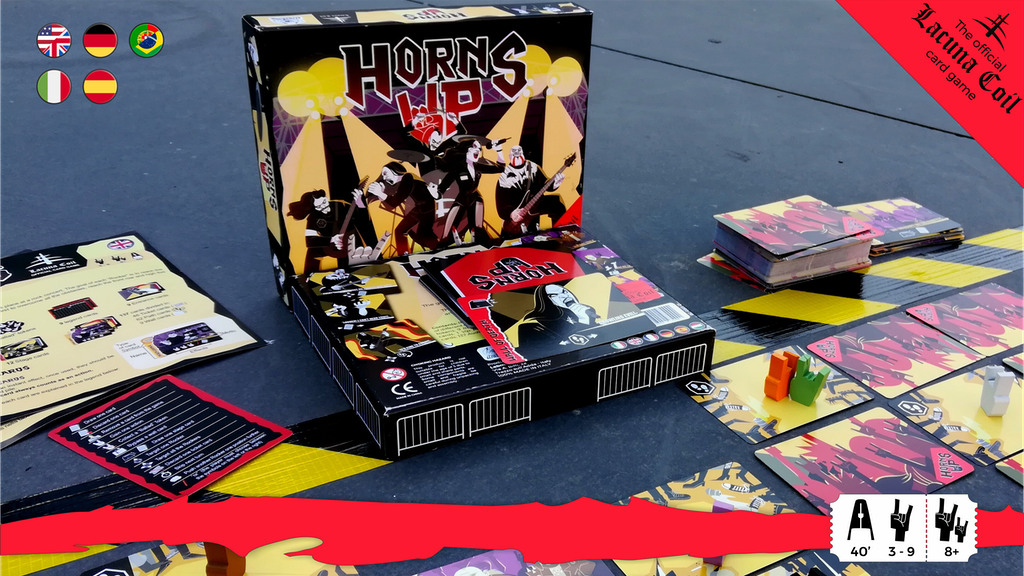 Reach the stage with your horns up in the very first party game set in a Metal concert.

Latest Updates from Our Project:

the first 2 print test was refused but last week we received the third and yesterday we approved it.

I'm sorry, it seems things gets longer when you are on late but this was a simple quality check. We couldn't say "ok let's print like this" or you'll get a s__t in your hands.

Marco's here, the CEO of Labmasu.

as written above Circle Pit Perils delay is my fault only.  But it is not a matter of bad habit.

let me explain my point of view.

Originally the campaign was planned for 2 expansions, the circle pit perils and security.

when The campaign ended we were afraid do lose part of the ideas developed so I (and me only) decide d to re-master the circle pit in order to contain also part of Security. This took some time , most of it taken to playtest.

The time to print it arrived...

The original printer is located in china and as you probably know, shipping from China become slow and costy. Print the expansion only was a bad decision but in other hand our distributors did'nt need copies.

I (and me only) decided to find out a new printer here in europe. I contacted 3 of them and asked them for samples (printing colors must be the same as original print or you can understand what you are drawing). Every test took 30 - 40 days and every test was made twice trying to adjust color tones.

No one of them went as expected but we paid all. In the while paperworks costs rised a lot as well as shipping costs.

And here we are.

I'm in total confusion and i know i took all the wrong decision possible.

I decided now to stat the print from the original printer in china, In middle september they will ship us 200 copies sent by express currier and we will post them to you. The rest of production will arrive later with a reprint.

Please accept my apologyze but i wasn't ready for this historical moment.

You will have your perk. It's a matter of time

1_ returned boxes: 7 boxes returned back to us during last week. 3 of them are from Russia and i can understand the why. Tomorrow we will contact all the others.

2_ circle pit perils: on may 4th we will have the last check, than the production will start. In (not) lovelly memory of the last delivery from China we changed supplier. We are working to make the final outlook to fit perfectly with existing cards.

3_ Live events: We will be in Modena Play and Wacken open air metal festival, who will be there for a beer?

5_ upcoming projects: we have a HUGE program for the next month

We finished the CIRCLE PIT PERILS. The new expansion will introduce a lot of new cards and a new way to win a game.

Before we print we would involve you in the last review, if you will find a WTF reading please let us know, we can adjust it before printing.

Welcome to the Circle Pit, the most dangerous place yet the most teeming with opportunities you can find in any concert!

This HORNS UP! Expansion requires the core game to be played and can be played together with the BLACK DECK expansion or not.

Will you face the challenge? Will you fail or will you collect precious Memorabilia? Jump into the Pit and… HORNS UP!

All the cards from the Circle Pit Perils have this little icon on them, so they can be separated from the rest of the deck.

All Rockers have a case or a drawer where they keep relics and memorabilia of their concerts, and here we are no less! The Display position stands in front of you outside the gaming area. During your active turn, you can place Memorabilia and Disaster cards here. This is a protected area, no card played by any other Rocker can influence cards in your Display Position.

Circle Pit Perils introduces a new Wall Card: Security Squad. This special Wall Card cannot be removed or bypassed via Crowd Surfing. If a Rocker is willing to discard any two cards from the hand, Security Squad can be moved to a different position.

These new cards have a different back. Whenever you, as active rocker, must draw a card and find a Peril Card on top of the Audience Deck, you can refuse to draw. If you do, you will not draw the card and lose the possibility to draw the starting turn card, starting from the first Rocker at your left, all the other Rockers can choose whether to draw the Peril or not. If all Rockers refuse to draw it, the Peril is discarded without being revealed. When a Rocker draws a Peril, this is immediately revealed to all players and immediately responds to peril request. After the reveal has been resolved, you can proceed with your active turn as normal.

Major Memorabilia are a new way to win a game of Horns Up! If you can collect a copy of Drum Stick, Guitar Pick and Set List you immediately win!

You may find these cards amongst Perils or Audience Cards: if you draw them from the Audience Deck, you can consider them ordinary cards as long as they are in your hand. When you play them, you reveal them and then, starting from the Rocker at your left, everyone can offer you ANYTHING (cards, snacks, miniatures, favors of whatever nature… everything they have) to buy that card. You can decide to sell it or keep it for yourself. Major Memorabilia are put in the Display Area (yours or of the Rocker who bought it). A Rocker can discard a Major Memorabilia to immediately draw two cards or offer it in payment at an AUCTION.

IMPORTANT NOTE: Major Memorabilia with “Perils” back, once revealed are put in your Display Area immediately without having to spend an action to play them.

When you draw a Minor Disaster, you must immediately reveal it and suffer the effects unless you discard a card from the Display Area or two cards from your hand.

When these are revealed, you can choose to face the challenge or back off. If you back off you discard the Major Disaster and your turn immediately ends. If you decide to face the Disaster you immediately pay the consequence, and then you can place the card in your Display Area. Once it is inside your Display Area you can discard it to cancel either the effect of an opponent card that targets you, or a Minor Disaster.

Not all Rockers are the same, and you will soon realize that. Each of these 18 Characters possesses a special rule you can activate freely during the game.

Shuffle the Audience Deck before adding cards from this expansion, and distribute the starting cards to every Rocker.

Then, add the cards from this expansion to the Audience Deck, shuffle it again and place it on the table.

Before the first turn of the first Rocker, every Rocker must choose one of the two Characters received, keep it and discard the other.